For hundreds of years it was thought of the idea of ​​building robots that met the needs of human beings and it was not Leonardo Da Vinci who was responsible for creating it, or in a part since he was only responsible for preparing the sketches of which it was used in the exact creation of what he wanted to represent.

Who was Leonardo Da Vinci?

Who was born on April 15 of the year 1452 and died in the year of 1519 on May 2, this was originally from Italy and a polymath of the fifteenth and sixteenth century, was known for his great skills as a painter and in engineering and invention of new devices, some of his best known works are The Mona Lisa and the Last Supper, but apart from these great paintings also left many ideas that could revolutionize life as it is known, these were collected and taken to about 20 volumes in a book , these ideas could not be developed until after hundreds of years due to the limited technical capabilities that were available at that time, and other problems that prevented them from seeing in their sketches what they wanted to express and made it almost impossible for their inventions to work without the advances of technology.

The robots of Leonardo Da Vinci 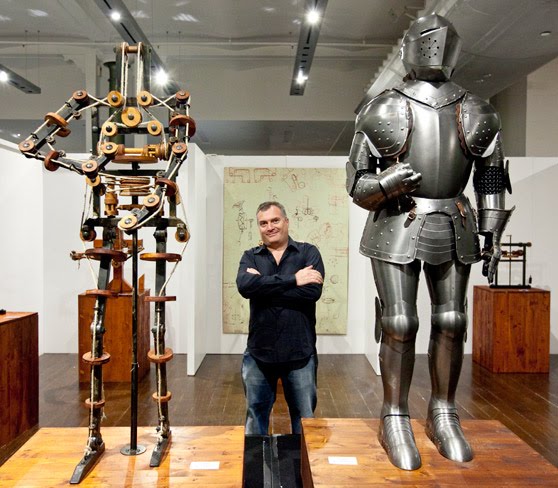 This man had a great ability to create paintings that became really famous at all times and even inventions that still inspire and surprise us, this man undoubtedly thought hundreds of things to the possibility of creating his own robot, and although it sounds a bit silly to think that at that point could think about that when we have not yet advanced enough in technology, because Leonardo Da Vinci if he could because this man at the time was one of the few who had permission to open the corpses of people who were executed or some other vagabonds (at this time it was seen as a religious taboo), which allowed him to study the interior of the human body and let him discover the similarity we had with what could be a machine or robots, and wondered why not create a machine that resembled us the human being.

He said it and he did it under the patronage of Ludovico Sforza, in the year 1495 Leonardo went to work in the creation of some toy that would serve in the entertainment of the attendees of the Sforza festivities, but what he did not know, is that his toy that thought that it was an invention only of entertainment will be in fact a true mechanical man.

It was not until 1950 that the sketches of these robots were found and without knowing if they could serve or not take into account each of those sketches to recreate exactly that robot that was made hundreds of years ago. And it was possible to recreate it and also discover that it served perfectly, it was a robot dressed in medieval Germanic armor, and was able to make several movements similar to those of humans. This became a breakthrough in technology.

Roadster of Musk of space travel with a doll